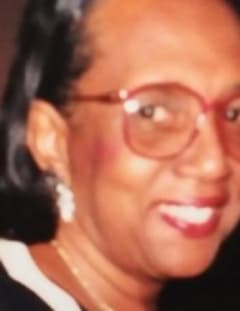 Carrie Emily Jackson, age 84, of Athens, GA passed September 12, 2020.
She was a graduate of Athens High and Industrial School, Class of 1952 (Athens, GA). After graduating from high school, Carrie earned an Associates of Arts degree, with a concentration in Nursing and Mental Health from the Community College of Baltimore (Baltimore, MD). In addition, in 1978 Carrie earned a Bachelor of Arts degree in Social Work. Her education afforded her an opportunity to humbly serve as a registered nurse for psychiatric and incarcerated patients.
She shared her love for cooking with her son Dexter, as she supported him as he nurtured his dream as the owner of Weaver D's Fine Foods. She previously served with the Athenian Club (Athens, GA) and the Order of the Eastern Star (Baltimore, MD)and she was a proud member of Zeta Phi Beta Sorority, Incorporated. She opened her home and her heart to at least 23 children in foster care. In addition, she served in various capacities with Georgia Head Start (Athens, GA), Goodwill of Athens, and the Clarke County School District. Most recently, her passion project was serving at the Bigger Vision Homeless Shelter.
A private funeral services will be held at 11:00 AM, Monday, September 21, 2020 at The Chapel of Jackson-McWhorter Home with interment in Evergreen Memorial Park. Public viewing, Sunday 11 AM-6 PM, at the funeral home.
Survivors include: her children, Dexter "Weaver D" Weaver, Barbara (Frank) Eberhart, Darrin (Toya) Covington and Robert Earl Spriggs; adopted children raised in the home, Christopher Jackson and Nigerria Jackson; granddaughter, Aliyah Jackson.
Arrangements by Jackson-McWhorter Funeral Home. www.jacksonmcwhorterfuneralhome.com

Please share a condolence, photo or memory of Carrie Emily. We welcome all condolences that are positive and uplifting that will help family and friends heal.