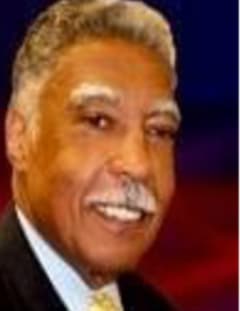 He was born March 15, 1939 in Philadelphia, Pennsylvania, only son of the late Edith Payne and John Henry Moultrie. Spending his childhood in south Philly, he later moved to Michigan. He graduated from Northern High School in Detroit, Michigan in 1958. He earned a Bachelor of Arts degree in Philosophy and Religion from Philander Smith College, Little Rock, Arkansas in 1965. After graduation, he became the Director of Media Center at Philander Smith College until 1970 where he was responsible for maintaining all media related equipment and the production of all promotional materials for the college.

While living in Little Rock, Arkansas, he married and had two children, Ron, and Stacy. Choosing to further his education, he went out west and obtained a master's degree in Education from the University of Southern California in Los Angeles, California in 1975, followed by post-graduate work toward a PhD in Media Design at Southern Illinois University in Carbondale in 1976.
Returning to Little Rock, Arkansas after being in Illinois, he became an Associate Professor of Education at Philander Smith College where he was responsible for designing and implementing instructional media classes for all education majors until 1983. During this time, he further extended his teaching impact as an Adjunct Professor of Education at the University of Arkansas, Little Rock from 1980-1982.

In 1983, he moved to New York, New York to serve as the Executive Secretary for Missionary Support at the General Board of Global Ministries, The United Methodist Church. In this position, he was responsible for generating financial support for over 2,300 national and international missionaries. He later shifted to an area where his artistic and creative talents were allowed more expression when he became the Director of Production, Promotion and Design in 2002. He brought all his God-given gifts in airbrush instruction and design, stained glass instruction and design (copper foil and came), graphics design, murals, photography, and communication to the work of producing, promoting, and designing all mission-related material for the General Board of Global Ministries until his retirement in 2005. After retiring, he continued to work wherever he lived whether it was in Mississippi or Georgia. He worked as a Host at Hollywood Casino (2007-2013), an Associate at Best Buy (2013-2014), and an Associate at Home Goods Distribution Center (2018).

He took another chance on love and married Paula Vanessa Milo on March 24, 1990 in New Orleans, Louisiana. They celebrated their 30th wedding anniversary in 2020. He was an extraordinary man, gifted artist, patient teacher, loyal friend, and the kindest soul.

A memorial service will be held on Saturday, January 30, 2021 at 11:00am, Jackson-McWhorter Funeral Home in Athens, Georgia with only family in attendance.

It was 1969 and I was a student at PSC. Mr. Moultrie allowed me to do the evening radio drive with all the R&B records from my collection (Chicago) that year. What a ride! Always an inspiration for our time. Please accept my condolences and my prayers for your family and friends. Erma Jenkins-Watts

Paula, Our prayers go out to you and your family. Your Ed was so kind and such a gentleman. I know he'll be missed. Take care. Maxine and Michael Bolden

Please accept my deepest condolences on the passing of a great man! Ed was a friend and colleague at GBGM and an exceptional artist. Jeri Mckie

Leslie and I remember with fondness his love and commitment to Gulfside Assembly in Waveland, MS. He possessed God-given talents and utilized them well in the church and the community. We will miss him! Bishop W. Earl Bledsoe

In our thoughts and cherish memories,ourloved ones are always with us may your precious memories and the sympathy of your friends help the comfort you and your family at this time. Is a prayer and God bless you Carree & Mary Coleman
Our staff will continue to keep your family in our prayers. We thank you for allowing us to serve your family.
- Jackson-McWhorter Funeral Home | Athens, GA