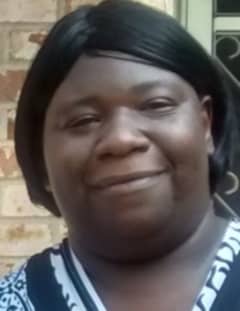 Funeral services will be held at 1:30 PM, Wednesday, February 19, 2020 at Mt. Sinai Baptist Church, 5365 Atlanta Hwy, with interment in the church cemetery. Public viewing, Tuesday 1-7 PM, at the funeral home.

You will truly be missed love Mario & Khloe
- na
To the Mother, Children, Brother, and Sister of "Rose" Pearson, I send my heartfelt condolences to you all. Its appointed to us once to be born and once to pass away... God has a plan that's best. Let the love and memories you all shared bring a smile to your face along the way... Knowing God never makes mistakes. Be strong in the strength of our Lord Jesus Christ. God Bless and Keep you all.
- Robie Gresham
It hurts my heart to write this. However, it must be done. Rosa will be truly missed. I've worked alongside Ms. Pearson at Bojangles. She taught me a lot on the job. And we've always had eachother's back. If anyone is reading this message, I want you to know that Rosa will be back. God has promised to bring back those who have died. John 5:28,29- (28)Do not be amazed at this, for the hour is coming in which all those in the memorial tombs will hear his voice (29) and come out, those who did good things to a resurrection of life, and those who practiced vile things to a resurrection of judgment. God has resurrected humans in the past. The Bible reports eight instances of humansyoung, old, male, and femalewho were brought back to life on earth. John 11:39-44 This will surely take place again in the near future. And I long to see Ms. Pearson again one day. Until then, may she rest easy. -Bennie Curry
- Bennie Curry
My heart breaks for you all. I remember Rose as I was introduced to her many years ago, always smiling, always happy and very easy to get to know. Rest in Heaven Rose
- Jennifer
Our staff will continue to keep your family in our prayers. We thank you for allowing us to serve your family.
- Jackson-McWhorter Funeral Home